With the OWL2e, EME Systems rolls years of experience into a data logger for the biological and earth sciences. The OWL2e has the features our customers have most requested, including nine high-resolution analog input channels, eight digital inputs/outputs, on-board BASIC interpreter, modular wiring panel, lightweight waterproof packaging, and enhanced reliability and ease of operation for the often difficult settings in which field research often takes place. We continue our tradition of offering high functionality at at a low cost, to serve in today's environment of tight budgets. 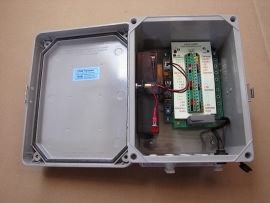 an external computer screen. Also available is a polycarbonate NEMA4 enclosure with transparent lid and LCD screen. The OWL2e enclosure shown is equipped with a stainless steel hinge and latch with padlock hasp for high security and extra ruggedness combined with easy access for wiring. Cord grips provide watertight access to the terminals for input and output cables. The case can be opened by removing four screws at the corners of the lid. The enclosure need not be opened for simple data uploads or reprogramming, but it must be opened for setting up or changing the wiring. The OWL2e circuit board mounts directly onto rails inside this enclosure. Please click here for the layout of the connection board.

We can pre-configure your OWL2e so you can be up and running quickly on your current project. Many of our customers come to us with a definite scenario in mind, a certain combination of sensors, a schedule of data to be recorded over time, a plan for retrieval of the data, and a range of parameters that need to be modifiable during operation in the field. Often these plans fit within the library of routines we have available, and we can do this pre-configuration for no extra charge . If the plan involves a new type of sensor or unusual programming or development, we are happy to undertake consulting work, drawing on our years of experience in both instrumentation and environmental research. The OWL2e can easily adapt to your future needs. We can write new programs for you, or you can do it yourself. The micro-controller inside the OWL2e, with its BASIC programming language, is one of the most popular and well-supported in the industry.

In one scenario, the user of OWL2e brings a notebook or palmtop computer to the a remote site in the field to offload the accumulated data and to change the configuration if necessary. We highly recommend the Hewlett Packard HP200LX palm-top PC for this purpose, but any ms-dos or Mac computer will do. The data comes from the OWL2e in a form directly compatible with spreadsheets such as Microsoft EXCELª. Between visits OWL2e is sealed shut and runs in its stand-alone mode until the next visit There are many variations on this theme. The OWL2e can be equipped with its own screen to display readings, or the OWL2e can be connected to the telephone lines to upload its data remotely. The OWL2e can also be programmed and wired to control external devices such as pumps and valves.

OWL2e features 9 analog input channels, reading voltage levels from 0.000 to 5.120 volts DC, at 12-bits resolution, 1.25 millivolts per bit. These channels can be connected to a wide range of instruments, to monitor temperature, humidity, pressure, light level, barometric pressure, wind, pH and a host of other variables. Sensor probes and amplifiers are available both from EME and from other vendors. With our TF temperature probe, the resolution is 0.125°F over a range of 3°F up to 225°F. If more channels are required, our 7:1 input multiplexer (IMUX) expands the OWL up to as many as 63 inputs.

The OWL2e has in addition 8 general purpose input/outputs. These are truly multipurpose, the versatility of which won industry "best products" awards for the BASIC Stamp micro-controller in 1994 and again in 1996.

OWL2e data memory is a non-volatile 128k-byte eeprom (electrically erasable programmable read only memory). A real time clock maintains the time and date, including Y2K compliant leap year corrections. At one record per hour, recording data from 9 channels with date and time, this memory is good for 220 days of deployment before the memory fills. OWL2e is capable of logging derived values, as well as raw data, and at intervals ranging from seconds to hours. The data file typically consists of records delimited by CRLF, and fields delimited by TABs, suitable for direct import into spreadsheet programs. Since the OWL2e is programmed in BASIC, the file format is flexible.

OWL2e program memory is separate from the data memory, a 16k x 8 non-volatile eeprom, which holds the tokenized BASIC programs of up to 4000 instructions. The programs are written on a DOS-compatible computer, and downloaded to the logger. EME Systems provides customizes a generic program for each application. The OWL2e manual that describes both the OWL2e hardware and programming. Many resources are available in print and on-line that support the popular BASIC Stamp micro-controller.

A half-duplex RS232c serial port, 9600 baud, is the OWL2e's primary port for data offload and programming and debugging. A line is provided for hardware flow control. Data offload can be accomplished using any terminal program such as PCplus on the IBM-PC compatibles, or White Knight on the Mac, or the built-in communications program on the Hewlett Packard HP200LX, or via telephone modem.

OWL2e has four power supplies to deliver power to sensors and other devices: These are unregulated power at 6 (or 12) volts, both constant (300 mA) and switched (150mA), and regulated 5 volts, again both constant (100mA) and switched (100 mA). All the OWL2e inputs and outputs are protected from surges (lightning) and error by active clamp circuits. System power comes from a 6 or 12 volt gel-cell battery, and/or from an AC power adapter or solar panel. A float charger for gel-cel batteries is included. Operating current is 22 ma; sleep mode current 100µa. The system can operate for months off a 1 amp-hour gel-cell, or indefinitely with a 1 square foot solar panel.

The OWL2e is available mounted in a watertight enclosure of polycarbonate or fiberglass rated NEMA4. An OEM version without enclosure is also available. The OWL2e can operate from -20°C to +60°C.